Vintage Albums and their contents: This first album has 14 thick cardboard leaves (28 pages – vertical layout). There is room for 24 cabinet cards and 16 Cvds.
I do not know the origin of this album, except that it was bought about 15 years ago at an auction sale here on PEI.  It contains  a collection of 13 cabinet cards and 3 CvDs and a small cut-out from a post card.

I first photographed every page, to make sure that the photographs corresponded with the right names, even after I took them out. This will ensure that I do not mix up the photos.
Unlike previous photo identification, this task was slightly a bit more challenging. I do have names to go with the pictures, I do not know where these pictures came from. I only know that all these pictures have a common thread – here on PEI – one person that was the keeper of this album.
The challenge will be to figure out who this person was.
If I were the keeper of this album, I would logically put in the people first that were closer related, than the pictures in the back.
(The first number represents the page the photograph was found on, the second number is the photograph number,  the highlighted yellow number behind it represents the order I was able to discover their identity.)

Page 1: photo 1 (12) A picture of a young boy, whose name according to the writing is Daniel MacDonald. On the back of the photograph is written: “Daniel to his cousin Mary A.” Photo was taken at LaRoche Studio, Seattle.

Photo of a young man with the name George Arthur. Photograph was taken at Notman Studio in Halifax. George Arthur, was born Sept. 12, 1866 (Lot 4, P.E.I.), the son of Gilbert Arthur & Catherine MacDonald. In 1891 he resides in Halifax as a medical student and not only becomes a doctor, but also a minister. He marries Rosa Belle McPherson (March 21, 1866 NS – 1947) and they make a home in Saskatchewan, later in Lavoy, Alberta where he dies 21 Mar 1943. Buried with his wife, their stone reads:”They Served Greatly”.

Page 8: no picture, no name 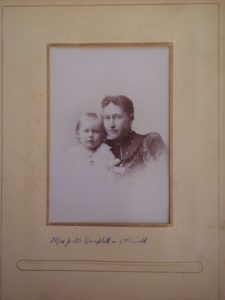 Page 17: photo # 9 (4)
Donald MacKay (Jan. 13, 1836 – Jan. 2, 1895) was a store keeper, fish merchant and political figure in PEI. He represented 2nd Queens in the Legislative Assembly of Prince Edward Island from 1876 to 1886 and 1890 to 1893 as a Conservative member. He was born in New London, PEI, the son of Donald McKay, a Scottish immigrant. He was a justice of the peace, a commissioner for Small Debt Court and a member of the board of Railway Commissioners.
He was defeated when he ran for reelection in 1886 and 1893. McKay died in Oyster Bed Bridge at the age of 58. On Feb. 17, 1861 Donald married Jane Matheson, daughter of John Matheson and Catherine McMillan, born April 28, 1839 on Glasgow Road, and died before 1891 .  They had one daughter, Janet Isabel born in 1873.
In 1895 Joseph Gallant acquired the Oyster Bed Bridge store which had belonged to the late Donald MacKay. 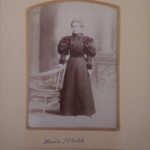 2 photographs with the same person: Suzannah Mariah Blatch was born Nov. 2, 1870 on P.E.I. – the daughter of Philip Robert Blatch (Dec. 6, 1838 P.E.I – April 23, 1894) and Catherine Matheson.
Sometime in 1899 she joined her sister Catherine Jane “Kate” in Rochester, Monroe – New York, where they were boarders at the same address (204 Main Street – Rochester) until 1902.
On Sept. 24, 1902, at the age of 32, Maria  married John L. Schmidt (later changed to Smith) in Rochester, NY. John was form German parentage, and made his living as an instrument maker for an optical company. They had 2 children, Robert B. and Ina B. Smith.
The pictures of Maria and Katie Blatch were both taken in Rochester, New York – at the “Studio of A. L. Lehnkering, 208 East Main Street , opposite Whitcomb House, a block away from their boarding house. 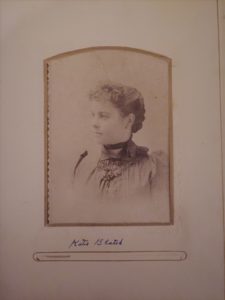 Catherine Jane “Katie” Blatch was born December 22, 1868 on P.E.I., the older sister to the above Marie Blatch. In October 1889 she arrived in Boston, Mass., and from there made her way to Rochester, New York, where she worked as a domestic for many years. At the age of 41, on Nov. 29, 1909 she married the 47 year old George William Emmons, the son of John Emmons and Keziah Rockefeller. George was a carpenter. This was a first marriage for both of them, and they had no children. After the death of her husband in 1917 at the age of 54, Katie moved in with her sister Maria.