Recently, on one of our Sunday drives we spotted this abandoned property on the side of the road, a house, a well-built barn, a shed and a garage. It would not be fit to live in, but yet it is well preserved still standing straight (mostly) and tall.  Telling a story of people farming, making a living, living off the land.
It sparked my curiosity. Who built this once stately house? What is their story? Where did they come from, and where have they gone? 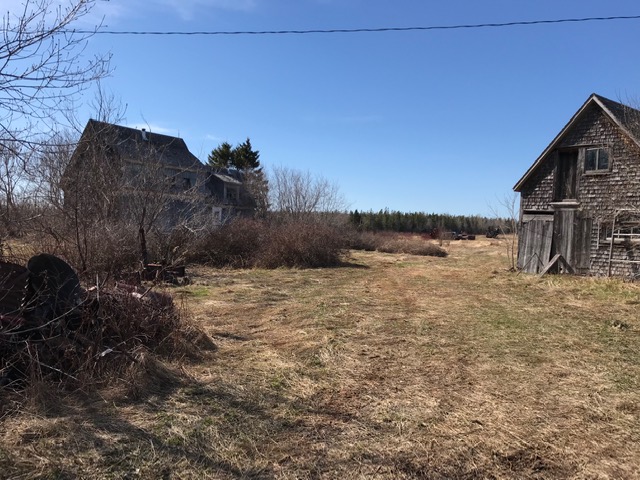 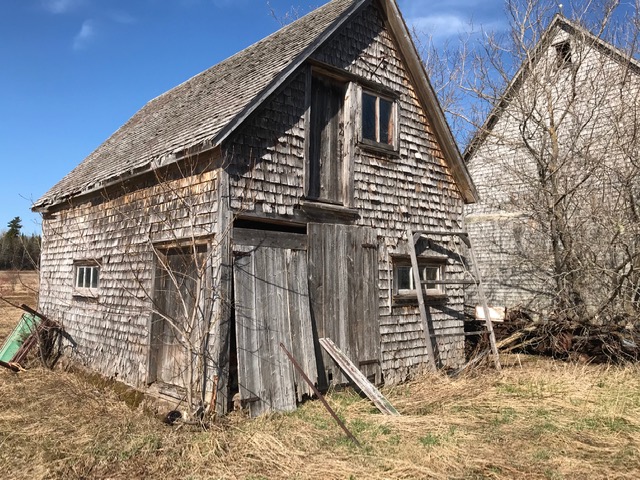 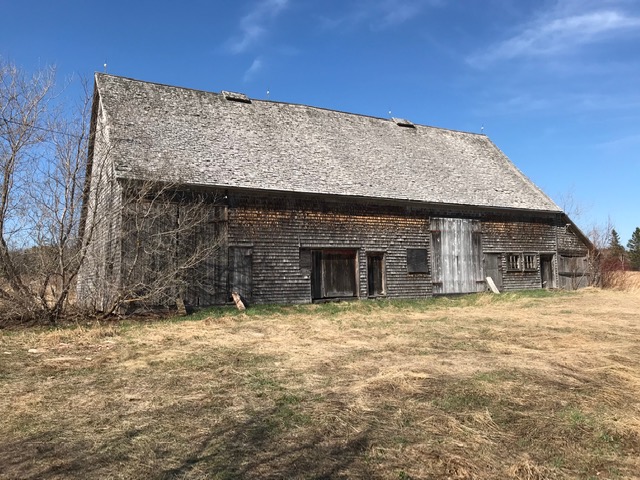 We were in Lot 8 – PEI – on route 14 – Hamilton Road close to the intersection with route 164 – Hebron Road.
Google Maps gave us these images: 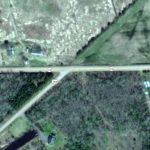 With that information we consulted our old PEI Maps:
Atlas of Province of Prince Edward Island, Canada (published by the Cummins Map Co. – 1928) 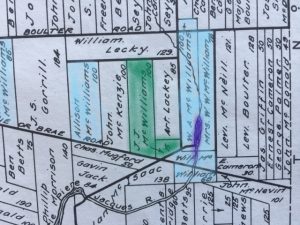 In the 1928 Pei Atlas, this property belongs to J. J. MacWilliams, as well as some of the surrounding large fields belong to the MacWilliams family. The dark blue highlighted area was the mill. His wife’s name is Caroline, and 4 children are listed: William, Allison, Clarence and Sarah. 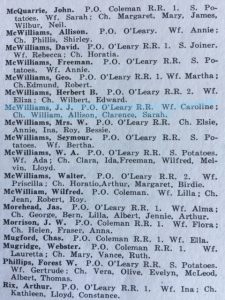 Illustrated Historical Atlas of the the Province of Prince Edward Island (by J. H. Meacham & Co. – 1880) 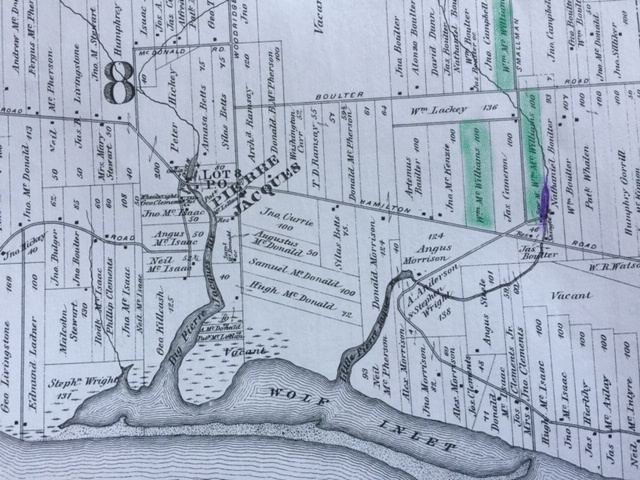 The Story starts with David MacWilliams, born about 1761 in Caithness, Scotland, the son of David MacWilliams. It appears that he came here with his parents and sisters in 1772 with other Scottish settlers. For a while the MacWilliams family lived in Covehead  and settled on the Tryon Point Road on the Creek Farm. On Feb. 12, 1784 he married Theresa (Tracy) Mutard(Muttart) in Tryon Point, at that time known as Coffin’s village, by Rev. Desbrisay. She was born in March 1766 in Bellechasse, QC, the daughter of Balthazar Moutarde/Muttart and Marguerite Holleri.
Tracy was Roman Catholic, David was a Presbyterian, and before they were married, they had agreed that Tracy would take the girls and David would take the boys to their respective churches. Tracy was understandably annoyed when she bore 5 sons in succession (James, Joseph, David, George, John) Eventually a daughter, Margaret was born. It is then that Theresa left David  refusing to bear any more sons. She took their daughter, and moved to Big Clear with her sister Sophia McInnis, where she raised Margaret in the Catholic religion. There are no records of divorce.
She died abt. 1838 in Dunblane (at son James’ farm), Lot 8, Prince and is buried at the Immaculate Conception Church Cemetery in Brae.
David, a farmer by trade, moved from the Creek Farm to the Crossroads and took a section of land between Tryon and North Tryon in order to provide farms for his sons. It was here the sons lived until they moved to Western PEI.
David died abt. 22 Oct 1818 in Tryon (2 mi W of Crapaud), Lot 28, Prince Co., PEI, Canada (Tryon People’s Cemetery).

William Bramford MacWilliams was born 1824 in Tryon. The 1880 Atlas lists him on Hamilton Road, Lot 8, as an owner of Saw & Shingle Mill and farmer. On 27 Aug 1847 he married Mary Grace Boulter, daughter of Henry Oliver Boulter and Maria Gard. She was born 04 May 1829 in Bedeque, Lot 26 and died 27 Mar 1905. She is buried at the Millburn West United Church Cemetery
After the death of her father, Mary Grace received 200 acres of land in her father’s will.
Their children were Theodore MacWilliams, Adolphus MacWilliams, Lorena MacWilliams (1852), John James MacWilliams born 11 Feb. 1857,
Seymour A. MacWilliams b. 1859, William Allison MacWilliams b. 1868, Maria Jane (abt. 1865 – May 30 1919)

After the death of William’s daughter Maria Jane, the newspaper The Pioneer, June 7, 1919 described it the following:

“There passed away at her residence at Milburn on Friday, May 30th, Mrs. Maria Boulter, the widow of the late Alonzo Boulter, who passed away last year. And a year previous her daughter passed away. The deceased was the daughter of Mr. Wm. McWilliams Sr., who is 95 years of age and who attended the funeral service of his daughter. The old gentleman, feeling the parting very much, made a sad sight as he stood by the casket.
The deceased, aged 53 years and 10 months, leaves a son Levi and a daughter May to miss her tender care. In addition, the following brothers are left: John J., Seymour, Theodore, Adolphus and William A.; also one sister, Mrs. A. Betts of Glenwood.
Mrs. Boulter, who was a member of the Methodist Church, was a much respected lady, hence on Sunday morning a large number of people came from all around to attend the funeral service which was led by the Rev. R. Brodie. After a brief service in the home of the deceased the casket was taken to the Methodist Church at Milburn, which was overcrowded, where the following hymns were sung: “Asleep in Jesus,” “O God Our Help” and “Rock of Ages,” while Misses May and Hazel sweetly sang “Shall We Gather At The River”. After a most solemn service the remains were laid in the little cemetery adjoining the church. The pallbearers were Messrs. George Wedlock, G. Thomas, James Silliker, W. H. Boulter, Alvin Boulter and Wm. Dyment.”

William himself passed away 4 months later, on Sept. 5, 1919 in Milburn, Lot 9, Prince County and was buried at the Millburn West United Church Cemetery

“The death occurred on Friday Sept. 5th, at his home at Milburn, of Wm. McWilliams, one of the most respected residents of the district. Deceased, who in recent years had been an intense sufferer, had reached the great age of 96, and in his passing the pioneers of this productive Island lose one of their staunchest comrades. Interment took place on Sunday. The funeral service held in Milburn Methodist Church was conducted by Rev. G. Ernest Whitham and the large gathering present was a fitting tribute to the high esteem in which the deceased was held. The remains were laid to rest in the family lot.”

“The death occurred at his home at Milburn of Mr. William McWilliams, one of the oldest and most respected residents of this county. Deceased, who during the latter months suffered intensely, passed away quietly on Friday, Sept. 5th. The funeral, which was one of the largest ever held in the district, took place on Sunday. The service, which was held in the Methodist Church, was conducted by the Rev. J. E. Whitham. Interment took place in the family plot.
Deceased leaves to mourn one sister, Mrs. N. Boulter, four sons, Seymour, William, Theodore and Adolphus, and one daughter, Mrs. Amasa Betts of Glenwood.”

( I do not know, why son John J. was not mentioned in the obituary. He is clearly listed in his sister’s death notice 4 month earlier. Maybe just an oversight)

These are the facts, I know where they came from, but I do not know where they went.
I assume, that the house was built either by William Bramford MacWilliams, or by his son John James. His sons, Allison, John and Clarence seem to stay in the area, but unsure which one, if any, took over the family farm.
Who was the last family to reside in this home? Who owns it now?
What I am sure of,  that this place has served its purpose for many years – a home for those that were born in it, grew up in it, lived in it and even died in it. A farm that provided for the needs of many families, a farm that required many long days of hard labour.
It will further dilapidate, deteriorate, and fall into ruin until there will be nothing left.
But for now these temporary structures are a testament to the hard work, accomplishments and endeavors of the MacWilliams families and we know that they were there. 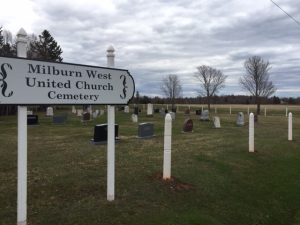 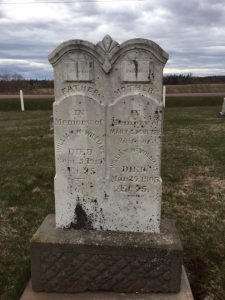