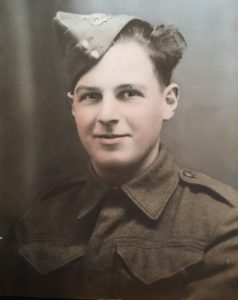 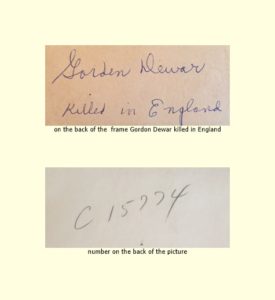 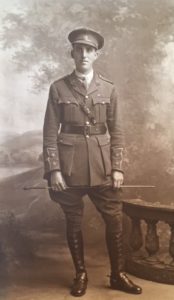 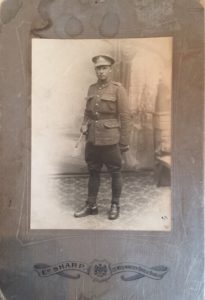 I find it always so sad, when photographs are auctioned off; no one to claim that family member as one of their ancestors. Probably treasured by those that lived and knew their stories, but unimportant to those that are left, because they do not know who they are and have no connection.
So, I bought these photographs at the estate auction of the late Kensington dentist Dr. Harold Clarance Stewart, with the intent of finding out who these young men were.
This purchase consisted of 3 black and white photographs, depicting 3 different soldiers. Only the largest frame (8″x 10″) had information on the back: “Gordon Dewar – killed in England”
The other 2 images have no identification marks, no names or dates, even after I disassembled the frame at home).

From his obituary I learned, that his father’s name was Carl Stewart and his mother was Florence Stewart and her maiden name was “Dewar”

Task 2:
Find out about a soldier named Gordon Dewar, by researching Island Newspapers.

There are some similarities between my photograph and the image from the newspaper. To say it is him,
I can not be sure.
The information I do glean from this obituary:
– he was killed in action Aug. 8th, 1944 in France
– four brothers: Kenneth, Athol, Stewart, James
– one sister: Margaret 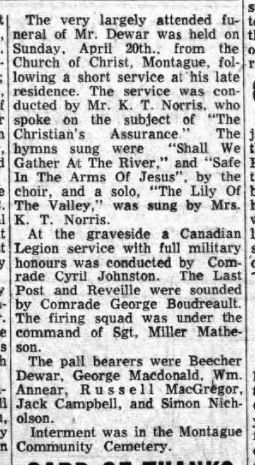 William Weston Dewar, a veteran of WW1, was married to Florence Mathilde Dewar (Gordon).
one daughter: Margaret MacKinnon
Kenneth, Athol, Stewart, James. There was another brother named Elvin who predeceased him in 1952.
He also leaves 3 sisters: Lillian, Jessie, and Florence Dewar (Mrs. Carl Stewart)
This, to me is proof why this picture was found in the estate of Harold Stewart.
Gordon Albert Dewar and Harold Stewart were first cousins.

This cemetery lies on the west side of the main road from Caen to Falaise (route N158) and just north of the village of Cintheaux. Bretteville-sur-Laize is a village and commune in the department of the Calvados, some 16 kilometres south of Caen. The village of Bretteville lies 3 kilometres south-west of the Cemetery. Buried here are those who died during the later stages of the battle of Normandy, the capture of Caen and the thrust southwards (led initially by the 4th Canadian and 1st Polish Armoured Divisions), to close the Falaise Gap, and thus seal off the German divisions fighting desperately to escape being trapped west of the Seine. Almost every unit of Canadian 2nd Corps is represented in the Cemetery. There are about 3,000 allied forces casualties of the Second World War commemorated in this site

There is a bit more to the story:
The History of the Third Canadian Light Anti-Aircraft Regiment (3LAA)

a page on the internet – a diary of what happened to that regiment that Gordon was a part of. It states, August 8, 1944 – on the day he died:

On 8th August, 1944, American Fortresses, due to an error in navigation, unloaded their bombs a short distance south of Vaucelles causing a large number of casualties. Eight members of the Regiment were killed and a number injured. No anti-aircraft guns fired at them.
Casualties on 8 August 1944 were:

Update: December 12, 2019:
Message received from Gordon Hume Dewar:
“He was indeed my uncle, he was killed in France. I was named after him. His father was William Weston Dewar from Roseneath, Brudenell area. His wife was Florence Gordon. My father, Kenneth was Gordon’s brother.
Gordon was engaged to an English lady at the time of his death.“
Case closed

Not all mysteries can be solved