No information on the following photograph, other than it was part of the estate of Harold Stewart and purchased at the same time as the photograph of Gordon Dewar.

I love to do research with my daughter Mary, even though it is at very long distance. Together we researched all the components, features and details of the Canadian Uniforms in order to identify who this soldier was.
We quickly realized that this image was WW1 and that this person was an officer in the Canadian Army.

2.  The Canadian Militia began the war wearing the Service Dress cap, which was characterized by a stiff crown and peak, with a leather chinstrap retained by metal buttons.
Regimental badge located above the strap (not clear enough to be identified)

3. WW1 British Officers tunic with open collar.
An open collar design, allowing the wear of a shirt and tie underneath
Identical regimental badge, as on cap, located on the collar.

4. Shoulder straps were originally designed to keep backpacks, ammunition pouches or bayonets from slipping off the shoulder. They often display badges of rank, shoulder marks, regimental insignia. This one is fastened by one button. There is a badge on the strap, however we were unable to identify it from this angle.

6. Cuff insignia – Staff officers wore rank badges on shoulder strap. Field officer wore them on the cuff.
He has two pips on each cuff
indicating his rank as Lieutenant.
Unfortunately, this distinctive scalloped cuff style worn in the first years of the war, made officers an easy target for the enemy and the pips were soon moved to the shoulder strap.

7. Military Medal – The medal was awarded to an individual for associated acts of bravery.
The silver medal (not normally worn) is round with a diameter of 1.4 inches. The obverse depicts the head of the reigning monarch; on the reverse, the text: “For Bravery in the Field” is engraved within a wreath of laurels. The ribbon is dark blue, 1.25 inches wide, with a narrow vertical stripe of white, flanked by two red stripes which are in turn flanked by two white stripes; all stripes being 0.125 inches wide. (Blue and Red colors don’t show on sepia pictures)

8. Officers breeches, leather gaiters, military boots and spurs, gloves and carrying a swagger stick – which was a short stick or riding crop usually carried by a uniformed person as a symbol of authority. Swagger sticks were carried by all other ranks when off duty, as part of their walking out uniform

9. He is wearing a ring on his right pinkie finger, as well a signet ring on his left ring finger. 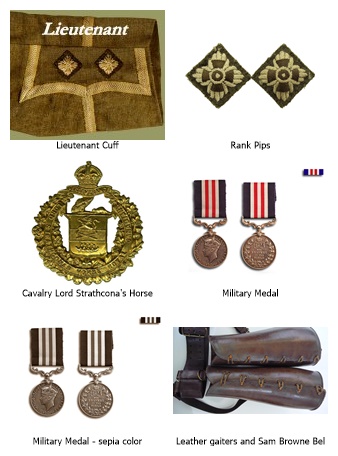 Now that we have “dissected” the uniform, we came to the following conclusions.
– Since we purchased this photograph On Prince Edward Island with 2 other photographs of Island soldiers, we can somewhat assume that this soldier was also from PEI.
– Because his picture was part of the estate of Dr. Harold Stewart we can assume that this soldier is somehow related to Dr. Harold Stewart or his wife Margaret Stewart (McLure).
– By identifying the uniform we concluded that this young man was a Lieutenant and had been awarded the Military Medal.
– We tried to identify the badge he was wearing on his cap and collar. By itself it was impossible, even with magnification. Mary found the following site
The British & Commonwealth Military Badge Forum
– We compared all the badges with the badge of our soldier, and came to the conclusion, that the “Lord Strathcona’s Horse” badge (Cavalry) on page 3 was the closest to the outline of our badge.
– We moved our research to Island Newspapers.ca 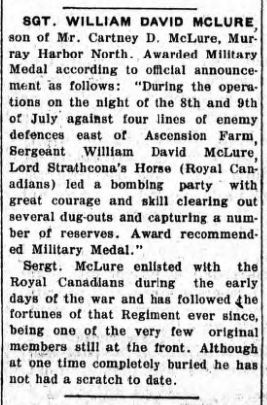 With search terms of “Lord Strathcona’s horse, and Military Medal”, the first person I came upon was Sgt. William David McLure.
I remembered that name, because  I had researched it when trying to find the identity of Gordon Dewar.
McLure was the maiden name of Dr. Harold Stewart wife, at whose estate auction we acquired the photos in the first place. What did not match our research was the fact that he was a Sergeant, not a Lieutenant. 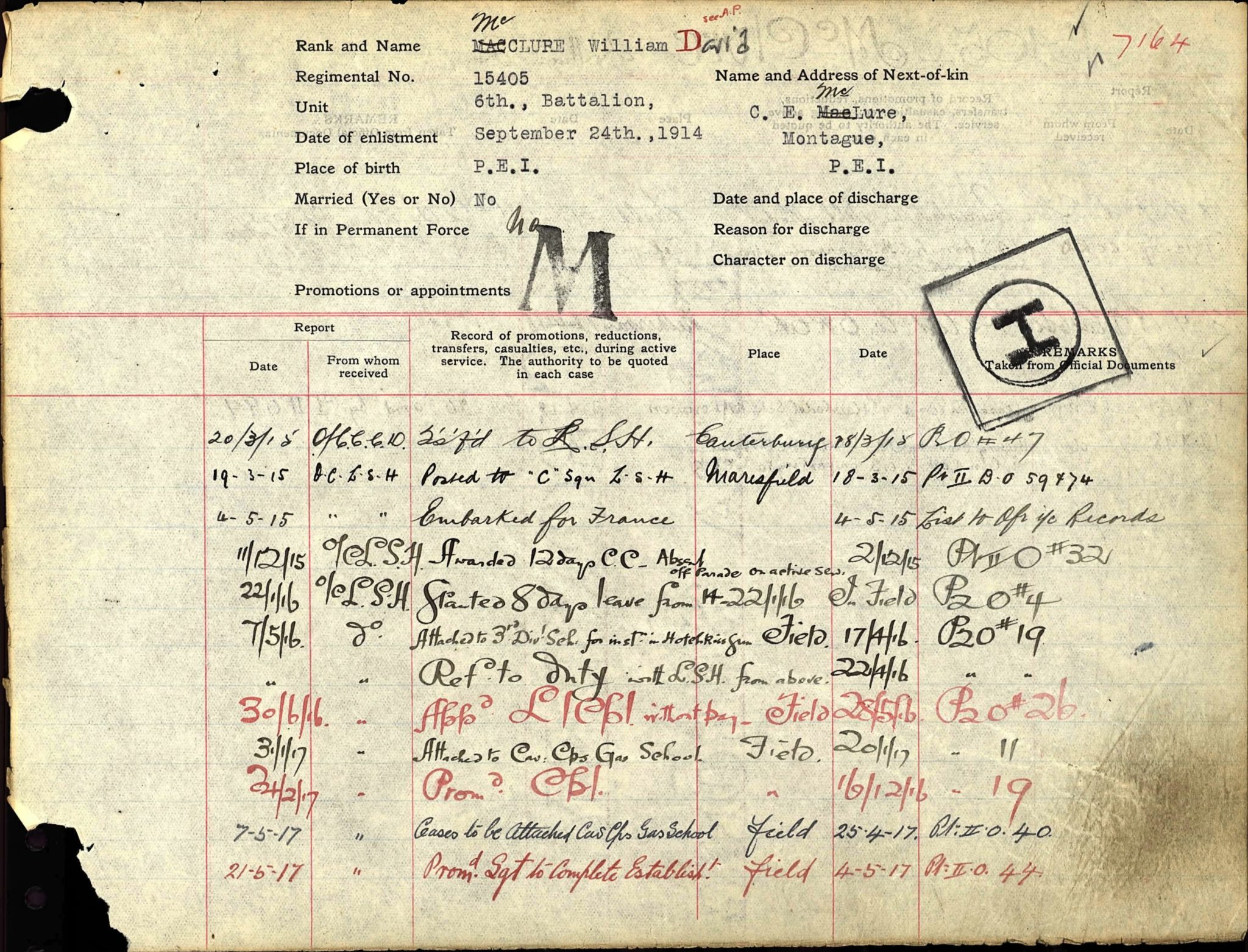 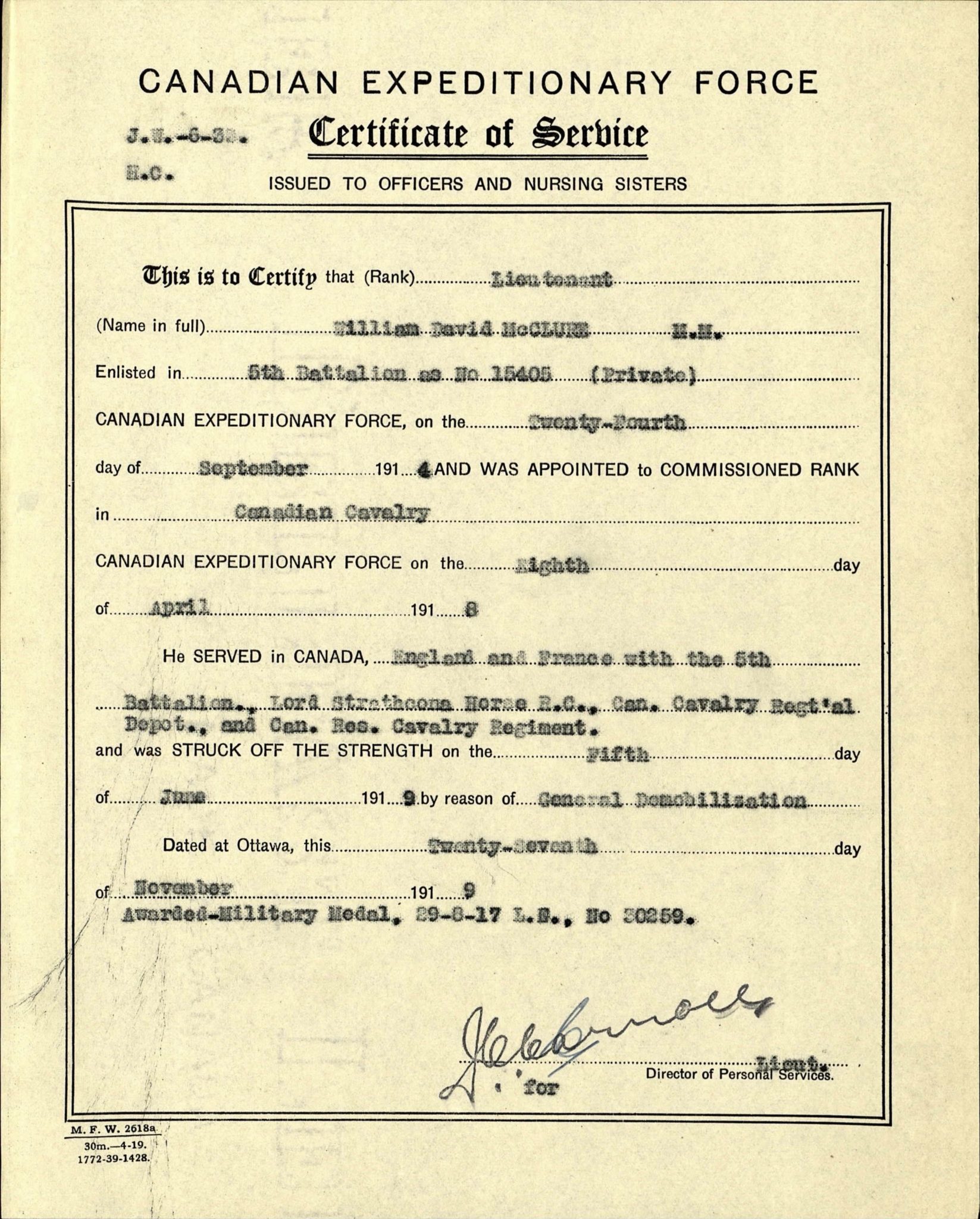 We decided to give our unknown soldier a name, since we were 75% sure :
William David McLure, born May 24, 1890 in Murray Harbor, PEI.
His parents were Cartney David McClure and Margaret Dixon. William had a brother named Chester, who was the father of Margaret Stewart.
I tried to find out what happened to him and was saddened to learn that he died fairly young, probably through the effects of his experience in the war.

William McLure
Summerside Journal
17 April 1933, page 4, col.3
Two boys going along the shore at Murray Harbor North, about 5 miles from Murray River, about 6 o’clock Friday evening discovered the body of William McLure, aged about 43, lying on the flats. The deceased, who was a son of the late Cartney McLure, had been employed by the Island Fertilizer Company in Charlottetown for the past two years and spent the winter at his home in Murray Harbor North. He had not been feeling well for the past week and a few days ago complained of a pain in his head. Friday afternoon he had supper about 4 o’clock and immediately after, in apparently good spirits, left for the shore to dig clams. It is thought he was seized with a weak turn while on the flats. 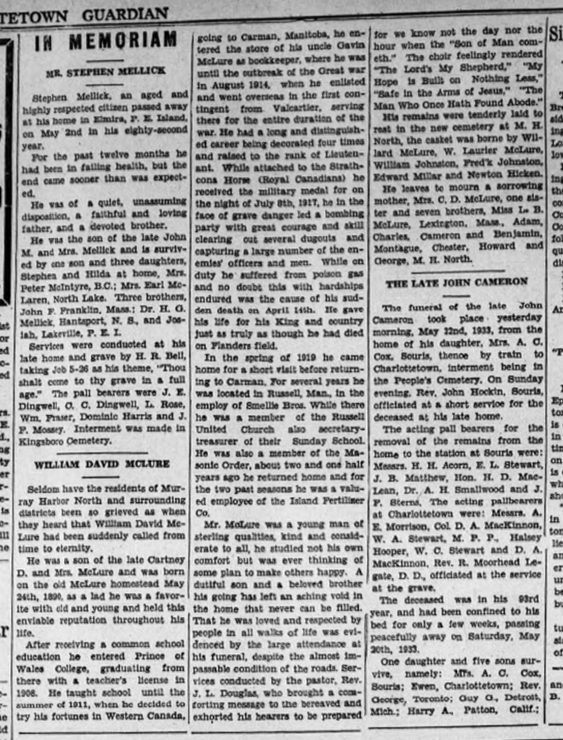 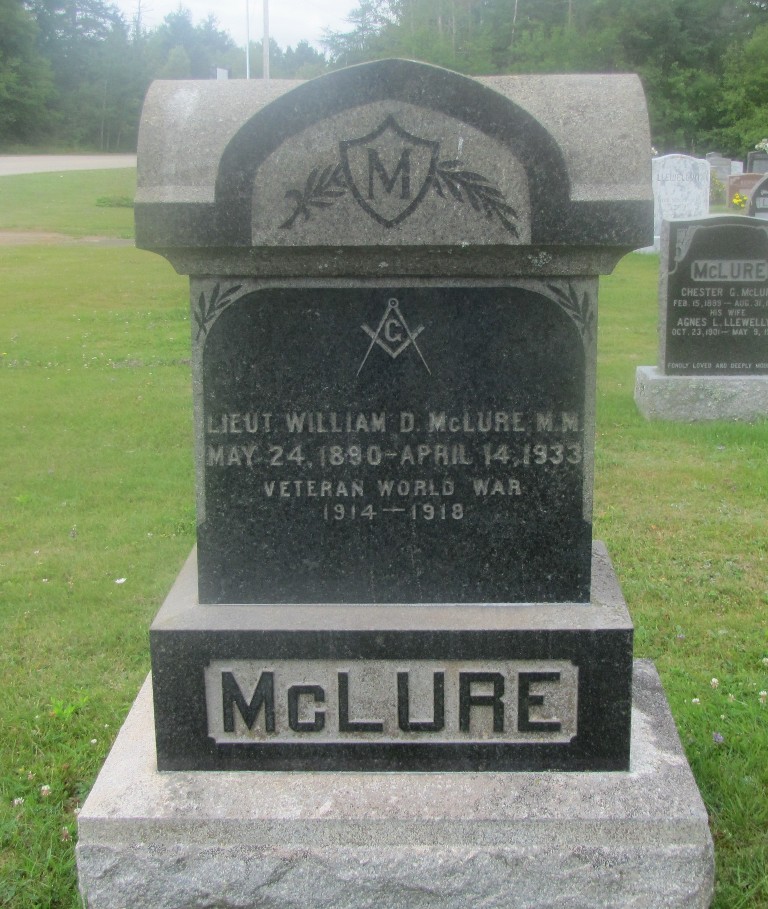